Mandurah yachtswoman Beverley Smale lost count of the number of blueberry muffins she baked while sailing two-thirds of the way around the world.

After taking delivery of their new French-built Fountaine Pajot Helia 44 – named Vivant – Bev and husband David decided to take a lengthy break and sail their new love back home, visiting 30 countries during a 4 and a half year adventure.

Dealing with scores of immigration and border quarantine inspections during their voyages, they soon learnt to be patient, so Bev would knock up a batch of muffins after dropping anchor waiting for the authorities to arrive.

With language sometimes being a barrier, the Smales discovered blueberry muffins and fresh coffee soon became the icebreaker for many foreign officials boarding Vivant.

The Smales bought their sailing catamaran through Mooloolaba-based Multihull Solutions, headed by West Australian Mark Elkington, and were one of several couples and groups from around the globe all picking up their vessels ex-factory.

Powerboat veterans along the WA coast, the Smales had not sailed before. Multihull Solutions European team soon had them familiar and confident with their vessel. Once across a relatively smooth Bay of Biscay, they went to the Mediterranean Sea to discover new horizons.

Similar to grey nomads on terra firma, word soon spreads on good anchorages and bays to visit – and levels of officialdom.

“I kept a muffin mix in the pantry and frozen blueberries in the freezer for such times, ” Bev said. “We learnt you can’t rush the authorities. Some were great, others were grumpy, but you could not rush them.

“The fresh muffins seemed to work a treat,” Bev laughed, taking a pack of Betty Crocker mix from the pantry aboard their current cat, a FP Lucia 40.

Flying home after a few months during the European winter, Vivant was put on the hardstand while a few warranty issues were fixed before the Smales rejoined their vessel to join an organised convoy of other recreational sailors to cross the Atlantic via the Caribbean Islands.

With so many island nations making up the group, Betty’s mix proved popular. Sailing across the Pacific, the Smales arrived in Brisbane before heading to circumnavigate Tasmania, back to the Top End and home to Mandurah.

Multihull Solutions says the majority of Australians buying new sailing catamarans in Europe elect to sail them home, making the journey a never-to-forget adventure plus saving up to $200,000 in transportation fees, duty and taxes.

David Smale is now the local representative for Multihull Solutions in WA and he and Bev will join a fleet of big boats in their FP Lucia 40 at next month’s Mandurah Boat Showcase hosted by the Mandurah Offshore Fishing and Sailing Club.

This free public event will be on the weekend of November 16-17 at the Ocean Marina and the number of exhibitors has increased substantially on last year’s event, which was designed to test the waters to resurrect the Mandurah Boat Show, once the third largest in Australia.

The Boating Industry Association of WA moved the annual event to Perth two years ago, creating problems for tall-masted yachts and big cruisers getting up the Swan River. 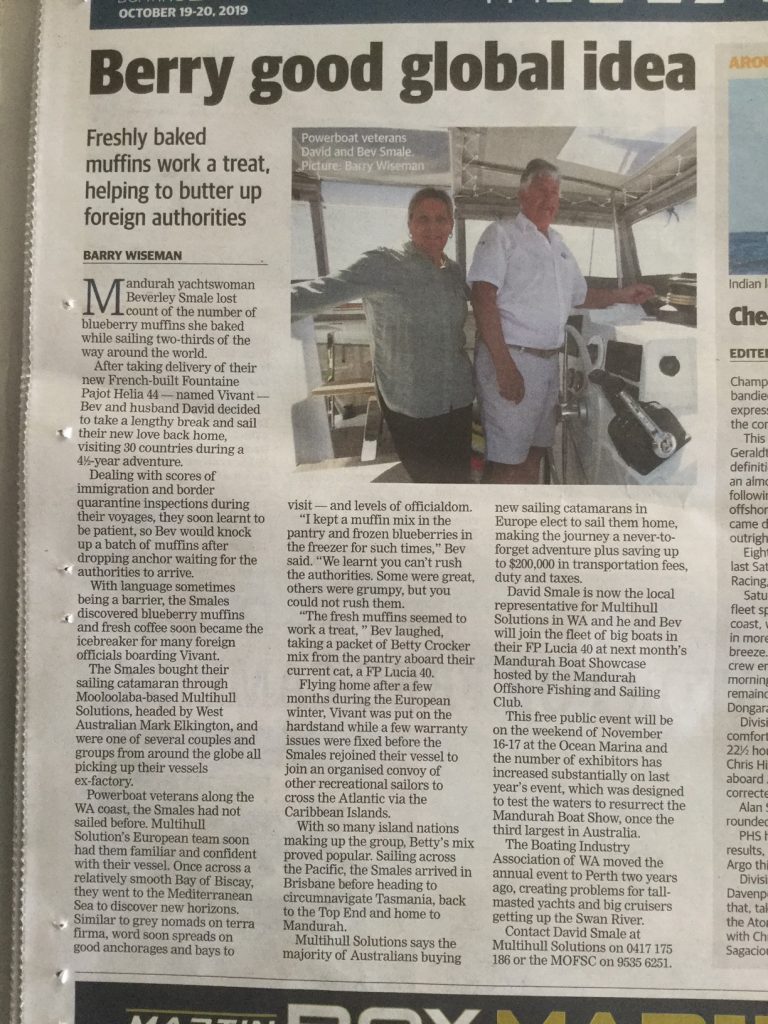