A major attraction of trimarans is their performance – as I experienced while racing through Sydney Harbour on the Orma 60 Team Australia doing 34 knots with one reef in. So, there’s an obvious reason why ocean records are made by ‘tris’ as they have both speed and stability. To a lesser extent this applies to the cruising varieties like the new Neel 51. “Trimarans have the weight centralised unlike a catamaran that has 50% on the downwind side whereas tris have 80% centralised,” company owner Eric Bruneel told me once as we walked around his yard in La Rochelle. This centralised weight also allows them to operate in wider wind ranges than similar catamarans as the trimarans typically can heel to about 27 degrees, compared with about 12 for cats, and with 30 foot beam, stability is immense. Performance figures for the Neel 51 show an average cruising speed of around 10 knots, allowing impressive 200 nautical miles days but with fresh breezes 15 to 18 knots are achievable.

Of course it’s not just about sailing performance – as the Neel 51 I spent time on during the boat show at La Grande Motte this year demonstrated – because living space is plentiful as well. Rather than a tiny cubicle in the centre of the Orma 60 that I could hardly crawl into, the Neel 51 has accommodation in all three hulls which adds up to six cabins and a vast aft deck. But as Leonard Cohen once sung, “there’s crack in everything, that’s how the light gets in” and so it is with trimarans whose imperfections include a lot of wetted area, beam wider than a tennis court and complicated structures that can mean a high final price. But having sailed and raced both large and small ones I must declare here and now a bias for these boats, so I didn’t need a lot of convincing about the merits of the new Neel 51 when Eric Bruneel showed me around.

Built in the grand old port of La Rochelle with its signature twin towers, the area is one of the largest yachting centres in western France and home to Amel, Dufour, Fountaine Pajot, Nautitech and other builders, so the region is a great place of us yachting tragics to visit. The yard is named after Bruneel and also produces race boats, so his team is very aware of weight efficiencies, as I found when looking closely at their best selling 45 (which has sold 23 hulls) and the flagship 65. The 45 proved its merits in 2015 by winning its division in the Atlantic Rally for Cruisers (ARC). Interestingly, the Neel 51 tips the scales at 15 tons, compared with 23 tons for a Lagoon 52, and both have similar sail areas. Bruneel is a former general manager of Fountaine Pajot and OSTAR winner (on his 55 foot ‘Trilogic’ trimaran) so knows what it takes to build a fast and safe multihull. For instance only one engine is required unlike two (heavy and expensive) ones on a cruising catamaran. “The 75 HP saildrives allows us to cruise at 9-10 knots,” said Eric as we looked at the walk-in engine room – accessed via a hatch in the main hull.

Looking around the 51, it was clear to me that the company has incorporated much of the earlier 45 and the later 65 design ideas but enhanced them, especially in terms of usable space. Stepping aboard into the vast aft deck is the most obvious feature. “We’ve integrated the inside seating seamlessly with the outside seating to create what we call a Cockloon,” said Eric about his idea of combining the terms cockpit and saloon. Some competitors – such as Bali – have similar ideas but none that seamlessly create this vast space for socialising. Sturdy doors drop down to ensure this becomes a seaworthy space when required and the wetbar means drinks are handily placed.
For that run ashore, there’s a single single davit and chocks for the dinghy. 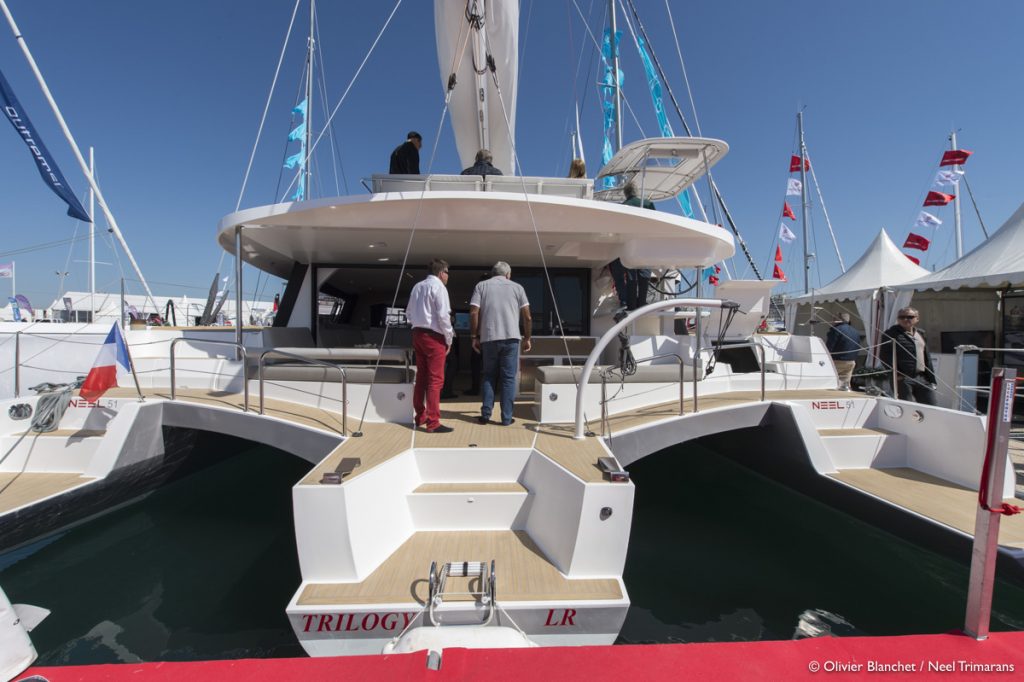 Two steps up from the Cockloon is the starboard helm station with flybridge lounge tucked under the boom. At the helm, a moulded fibreglass seat gives good support – a good idea for an elevated steering position. The console controls included a Maxpower bow thruster and Raymarine electronics with autopilot near at hand and throttle outboard – so rather exposed to passing crew or errant sheets. Just in front, separated by the corridor from the Cockloon, sat three Antal winches – two electric halyard ones and a central manual one for sheets. Overhead, a canvas bimini shields you but can be unzipped to view the mainsail. The mainsail is controlled by twin sheets running on transom mounted blocks to gives good leverage on the boom and is easily accessible from the flybridge sunpad; plus there’s lazyjacks to gather it.

Moving around the Neel 51 is easily done, thanks to flat decks with near flush hatches that guide you safely to the bows which have nets on each side of the main hull to minimise weight and drag. Here you can also see the near vertical bulkheads around the main saloon, which creates volume inside while an outside lip gives shade. A central deep hatch houses the 24V horizontal windlass which runs to the anchor beneath. The Neel 51 has an extensive sail plan, so ideal for the varied conditions found while bluewater voyaging. The cutter rig comes with a self-tacking staysail for easy handling and outside genoa while the fully battened mainsail has a big top and is slab reefed. A fibreglass bowsprit ensures good separation for flying a Code 0, which has winches outboard on the amas. All sails are Dacron as standard with a performance Hydranet option. Hydranet is good for performance cruising with less shrink through woven dyneema impregnated cloth. The alloy spars are supported by dyneema-vectron shrouds, which minimises stretch and weight aloft.

Walking through the vast Cockloon leads you to the forward galley, with stairs down below on the portside to the cabins in the outer port hull. The U-shaped galley rather restricts the number of users but it does keep you safe in a swell. A large amount of Alpi clad cupboards allows plenty storage, including space for the optional dishwasher. The high standard of equipment includes a four burner stove and oven plus optional microwave. Double drawer fridges can hold 190 litres plus 92l of cold storage. There’s a deep sink nearby and plenty worktop space for food preparation. A smallish opening window helps air through flow. Over on the starboard quarter is the spacious navigation station with bucket seat. Navigation instruments include a second head for the autopilot here.
Just behind is the deck-level owner’s suite, an ideal feature for the newbie sailor or anyone suffering claustrophobia. The double bed with walk around space at the headboard lies athwartships so the occupants have sea views through the large rectangular window. The ensuite ensures privacy and headroom looked nearly 2m.
The main hull’s bow cabin is reached by stairs near the navigation station which reveals a spacious berth. The bow cabin has its own ensuite with separate shower and the deep hull means there’s plenty head space while opening portholes gives a breeze. Down in the starboard hull the aft double cabin has a semi-island bed with hull escape hatch nearby – an essential safety feature – while forward is the ensuite with a shared space for head/shower. This layout is replicated in the port hull. Alternatives include bow berths on each outside hull or for the bluewater sailor, storage.

Construction techniques have advanced for the build of the 51, as the three hulls are now infused in one process, which increases structural rigidity and reduces costs – only two hours for infusion after the 10 day preparation. Materials used are polyester with vinlyester resin that impregnates the closed cell PVC foam core which is covered in quadriaxial fibreglass cloth.

The deep hull allows plenty volume which means the engine room is vast with 2m headroom. A hatch near the galley has a ladder down to the outer part which has the battery bank near the keel, so aiding stability, while the hot water, water maker and other systems are also low set here as well. Also good is the placement of the Onan generator set in the central forward part of this room and all electrics are elevated to avoid water incursion. Further aft via a water tight door is the engine, a 75 HP Volvo saildrive, which is dwarfed by the free space around it, so is easy to work on for servicing.

Overall, the Neel 51 clearly builds on the proven success of the 45 so is a serious contender in the multihull world, especially when the reasonable price tag is considered.