In many sailing couples, one partner is the driving force behind the dream of extended blue-water cruising. Gita Sonnenberg and Norman Pater share their journey with Caroline Strainig. 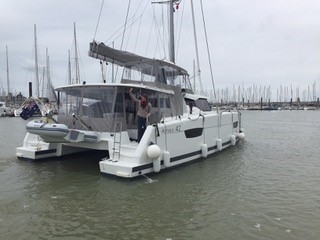 Dutch-born Gita still chuckles when she remembers how Norman broached the subject of buying an Astrea 42 sailing catamaran and taking to the high seas.

“I’d just moved to Western Australia; we had just got married and then he told me he’d like to buy a catamaran and sail it home from Europe.

“I thought, ‘Now what is hanging from my bike?’, which is a Dutch saying expressing utter shock.”

But she admits she could see it coming, not necessarily sailing, but some kind of big journey.

“We had just made a long cycling tour through Germany and Austria. Norman learned about even longer treks through Asia, so at first I thought that would be next on his wish-list – but it changed to sailing,” Gita said.

“Neither of these adventures I would ever have chosen myself. I’m not un-adventurous, but I would feel way too committed to two sets of family and friends on both sides of the world, and to my work in WA, plus a sense of, if you want to grow roots somewhere, you have to physically be in that place.

“Then again, I couldn’t really feel a big objection to help Norman realise his dream.”

A dream way to live off the grid

Cruising the world in a low-carbon-footprint vessel was actually quite a logical move for the two environmentalists who have a carbon farm in Western Australia and are passionate about all matters environmental.

“I wanted to reduce our environmental footprint, and so loved the idea of a tiny home,” Norman said.

“This tiny floating house we have is a dream way to live off the grid with an ultra-low carbon footprint. The travel we do and the lovely places we see along the way are just a huge bonus!”

They started the buying process last year September at the boat show in Cannes, France, after which they fine-tuned what options they wanted for their catamaran, which they called Kaya.

To prepare them for their plan of extended cruising they did several courses: first-aid, VHF, safety at sea — and for Gita, a novice sailor – a four-day sailing course.

In April of 2019 they flew to La Rochelle in France, to pick up their new yacht, taking advantage of the factory-delivery option.

After a busy few weeks commissioning Kaya and provisioning, they set off in early May and sailed north, up the French coast, then on to The Netherlands, Germany, Denmark, Sweden and Norway. The plan is to leave Kaya in Denmark for the northern winter, and come back in 2020 and explore the eastern side, so east Sweden, Finland and Russia.

If all goes well, they will do the Med in 2021 for a year or two, then sail westwards until they get home to Australia.

Norman had sailed on a friend’s yacht in South Africa as a student and a McGregor 26-trailer-sailer in Fremantle. He had also helped sail a catamaran from Sydney to Exmouth and back to Perth over an extended period so had some experience and skills before their adventure.

Not surprisingly he is loving cruising Europe: “After doing 2,400nm on the Astrea in four months I am loving it!” he said.

However, sailing was something almost totally new for Gita because her previous sailing experience comprised a few disastrous outings on an ex-boyfriend’s monohull.

Rather than just throwing her in the deep end and setting off in their new catamaran, Norman introduced her to sailing in an idyllic location with flat water: chartering a catamaran in Greece.

“That was a lovely experience and everything went very well,” Gita said.

“The rest I think was not so much Norman trying to get me to share the dream, but more about me feeling that somehow I said ‘yes’ to it,” she said.

“I don’t think it was a dream either to start with. It’s been a huge project that has asked a lot of work from us both, so certainly in the beginning it’s more of a mountain you climb together.

“It was only after a few weeks or even months of sailing that I started to see it as a dream. It takes practice, skills, time and work for it to be a dream.”

“Yes, those orders were a big hurdle! It really was difficult being a newbie – but I do recognise it is my own sensitivities that make it hard to take orders,” Gita said.

“Norman is the captain and the experienced one, so both our lives really depend on me being able to do what he asks without questioning it. Of course, I still do, especially when I’m scared. It really is hard, when sometimes you’re asked to do really important jobs without knowing what to do.

“The main thing though has been fear – of big seas and big winds – and I’m still trying to learn enough to overcome it.”

She has asked for a pair of “marriage savers” (walkie-talkies) for her birthday to help with communication as well because hearing each other on a big catamaran can be a challenge at times.

Being together a lot and not seeing other people has also been something they have both had to adapt to, but not something that was as hard as Gita feared it would be, or you’d think if someone told you you’re going to be in a confined space with the same person for six months.

“It’s not like that either, of course!” she added. “And you meet other sailors too who are keen to share a drink and a chat; we’re all in the same boat.”

Breaking up the jobs

Norman does most of the steering and is the decision-maker. Gita tries to contribute by making weather-reports and taking the helm when they are both confident that it’ll be all right.

“I can set the sails and do the tying up in a harbour, so I really just try to help whenever I can, and try to accept it when I cannot do something,” she said.

Norman says Gita has taken to the cruising lifestyle like a duck to water, and she does not give herself enough credit for her contribution.

With the benefit of hindsight

Gita’s advice to other couples dreaming of following in their wake: “Buying a boat to go cruising for an extended period is a huge project and takes time and money away from other things in your life,” she said.

“And know that even when you’ve stepped on board, there’s still a lot of work to be done. Getting to know the boat, provisioning, learning about the weather and places to go.”

“As a fellow lady sailor said, it’s like every day is a Saturday; it’s not quite work, but it’s not Sunday either.”

Gita said her four-day sailing course was a wonderful foundation, so she could immediately help with tasks like tying knots and docking.

“It also helped me personally to learn lots more. Not everyone is like that: I’ve met partners who prefer to not sail at all and just let their husband and crew do that work.”

“Norman also treats me as a team member, so it would be hard for him if I’d just sit on the couch and read.”

Another skill which has stood them in good stead was Gita’s working knowledge of French and German.

She shares some advice she herself received from long-term cruisers: allow yourself to enjoy wherever you are.

“With sailing you have little control over the weather and you can’t always choose your destinations,” Gita said.

“I have loved almost every place we visited, whether obviously ‘picturesque’ or just plain boring, because a town always has a soul, and it’s wonderful to get to know it no matter how it looks. “

Norman’s top three do’s with the benefit of hindsight . . .

Would they do it again?

And one last question, would they do both it all again?

Norman: “Absolutely. The freedom has been wonderful; the sights priceless,” he said.

“We have loved our time in the Nordic countries especially. We love our choice of Astrea and almost all the options we chose. We’ve had excellent service from Nod, Romain and most of the suppliers along the way.

“If at any time we got sick or lost love of the journey, we could always get Kaya shipped home. And we could find crew for the big crossings which we’re not really that keen on doing ourselves.”

Gita: “Yes, though I’m not as comfortable yet as Norman is,” she said.

“But now that we are getting ready to leave Kaya for the winter, I notice I do look forward to going back next year and sailing some more, and maybe one day be brave enough to do a crossing!”